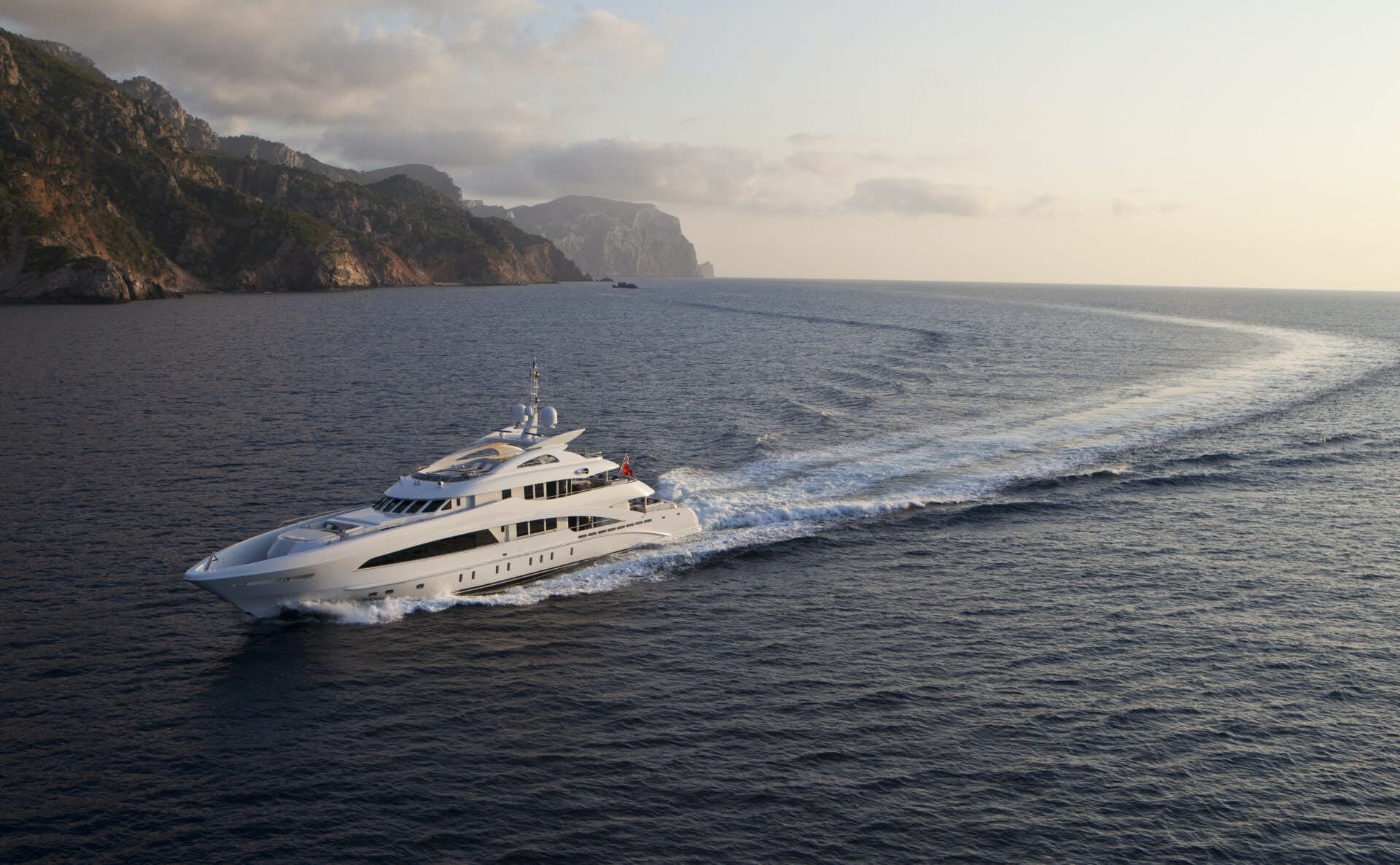 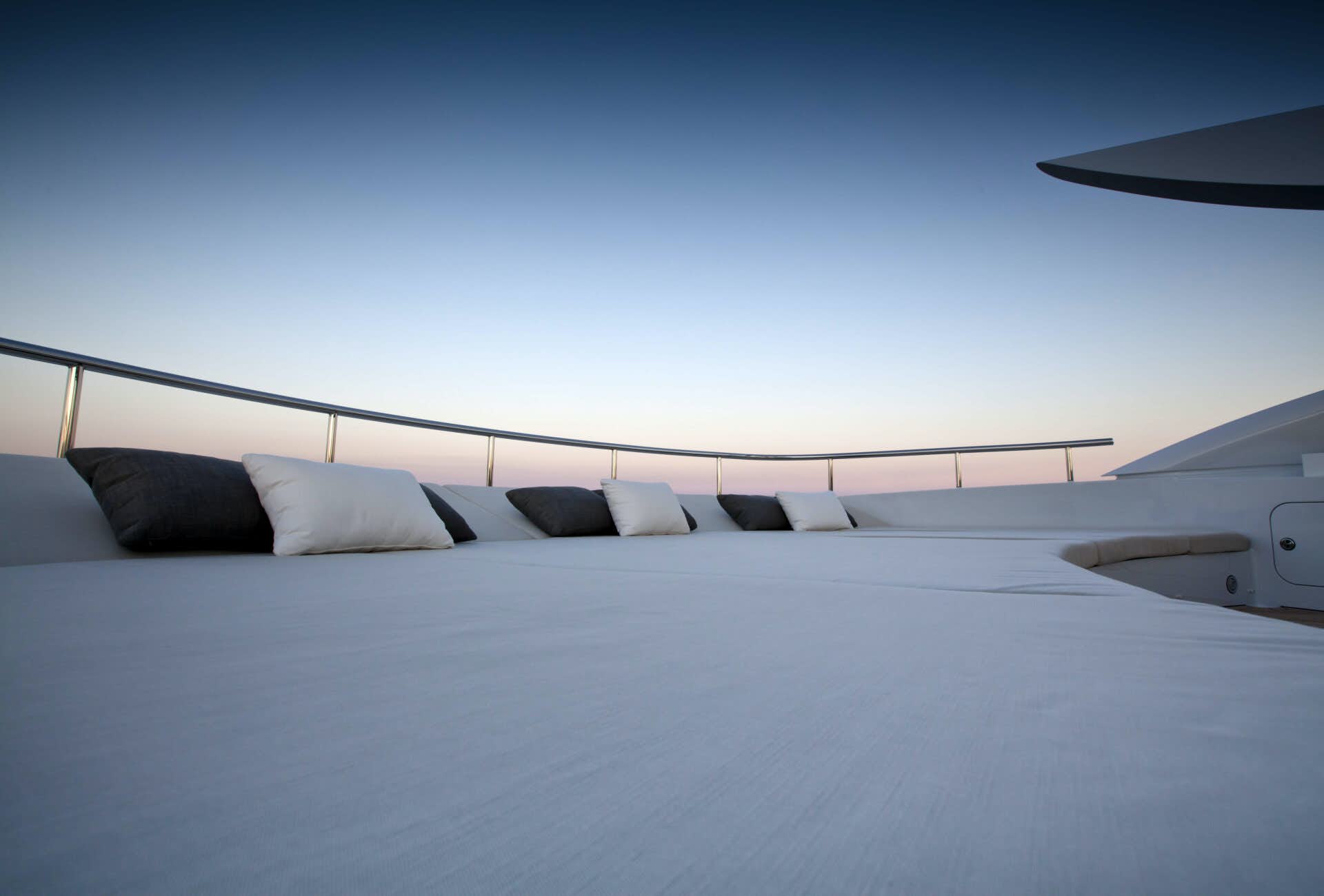 Specializing in custom superyachts built in aluminum and steel from 100-feet (30m) up to 230-feet (70m), the Heesen brand was founded in 1978 in Oss, Holland. Although these days they are perhaps best known for their displacement motor yachts, Heesen has always been dedicated to pushing the boundaries in design and build. The yard’s founder, Frans Heesen, began his career in the hi-tech plastics industry before moving into yachting. His knowledge, combined with the talented maritime craftsmen and artisans from Holland, led to the use of aluminum in superyacht builds. Today Heesen is leading the way in their efforts to meet owner’s demands for fast but still fuel-efficient large motor yachts by delivering award-winning vessels that combine speed and style.

It was Heesen’s pioneering spirit that made Heesen Yachts the only shipyard in the world brave enough to take on John Staluppi’s Octopussy project. This 1985 challenge from the client to any shipyard was to build a large yacht that would travel at more than 50-knots, a speed which at the time was nearly double what any yacht had previously been capable of. Several shipyards declined the challenge, but Frans Heesen decided to take a gamble that his engineering ingenuity would overcome the technical challenges, and the rest is history. The resulting 124-foot (38m) Octopussy was delivered to her owner in 1988, breaking the 50-knot barrier and becoming the fastest luxury yacht in the world. The yard went on to deliver many firsts over the next few decades, including the world’s largest sportfish in 1996 (M/Y OBSESSION), their first steel displacement yacht in 1992, the world’s first Fast Displacement Yacht in 2013 (M/Y GALACTICA STAR), and the first yacht in the world to harness kinetic energy with Hull Vane in 2014 (M/Y ALIVE).

The 2013 built 213-foot (65m) GALACTICA STAR was the first incarnation of Heesen Yachts Fast Displacement Hull Form, developed for Heesen by Dutch naval architects Van Oosanen. Combining a 20-knot cruising speed with a range of 4,200 nautical miles, and a top speed of over 28 knots, Galactica Star is over 30 percent more efficient than a traditional superyacht of the same size. This is due to her efficient hull design. She boasts a 65-foot (19.8m) sundeck, a duplex beach club that occupies 25 percent of the main and lower decks and a touch-and-go helipad on the foredeck.

Following in the footsteps of GALACTICA STAR, the 230-foot (70m) GALACTICA STAR NOVA, delivered in 2016, took the Fast Displacement Hull Form a small step further. With an extra engine on board, she is capable of up to 30 knots. Like GALACTICA STAR, GALACTICA SUPER NOVAIS is not a semi-displacement yacht, and also runs as a displacement hull, whereby the bow pushes the water to either side rather than lifting and planing on top of the water after a certain speed. The main difference being that her hull shape and its entry through the water allows higher speeds with the application of more power. Therefore at 12 knots she still has a range of 4,000 nautical miles, which is comparable with a normal full-displacement yacht. But can still do 30 knots in full throttle. With over 1,000 square feet of deck space, including a vast sun deck and beach club, she is the equal of any conventional full displacement yacht, but with the advantage of long-range cruising capabilities and the ability to go faster than just about any other 230-foot (70.1m) superyacht afloat.

Dedicated to pushing the boundaries in design and build

Never keen to rest on their laurels in continuing their pursuit of constant evolution and innovation, the yard has delivered several other ground-breaking designs in recent years, including the 164-foot (50m) full displacement hull form HOME. The first fast displacement all-aluminum build and boasts a reduced environmental impact, thanks in part to her hybrid propulsion system. Previous hybrid yachts have used a diesel electric power base, with expensive lithium-ion batteries for storing excess power produced by the yacht’s diesel generators. But rather than being either all conventional diesel-mechanical or all diesel electric with batteries, HOME offers both. Two shaft-driven electric motors powered by her efficient generators will allow her to efficiently power through the waves at up to 9-knots without using her main engines. Consuming around 26 US gallons of fuel per hour at cruising speeds and just 18-knots at economical speeds, she is as a result, the most fuel-efficient vessel in her class. With main engines running however and more speed required, the electric motors can also be used to provide free electricity to the yacht. Working altogether with everything on full, they can provide a speed of up to 16 knots. Her modern profile boasts a vertical stern that looks radical on the water, while the design throughout is inspired by open-air beach villas. Panoramic glass walls offer unblemished views, while the interior is light and airy, designed to bring the outdoors in.

The state-of-the-art Heesen shipyard spans over 4.4 hectares with nine sheds and five dry docks. Here the team of world-class craftsmen, engineers and designers create the current fleet of Heesen yachts including displacement, semi-displacement and the revolutionary fast displacement hull form. They also offer a complete care service for Heesen’s fleet of yachts throughout their lifetime, with a crew training academy for engineers and deckhands, and a refit service.

For further information on Heesen yachts for sale, a new build Heesen or to charter a Heesen yacht, contact your Northrop & Johnson broker.