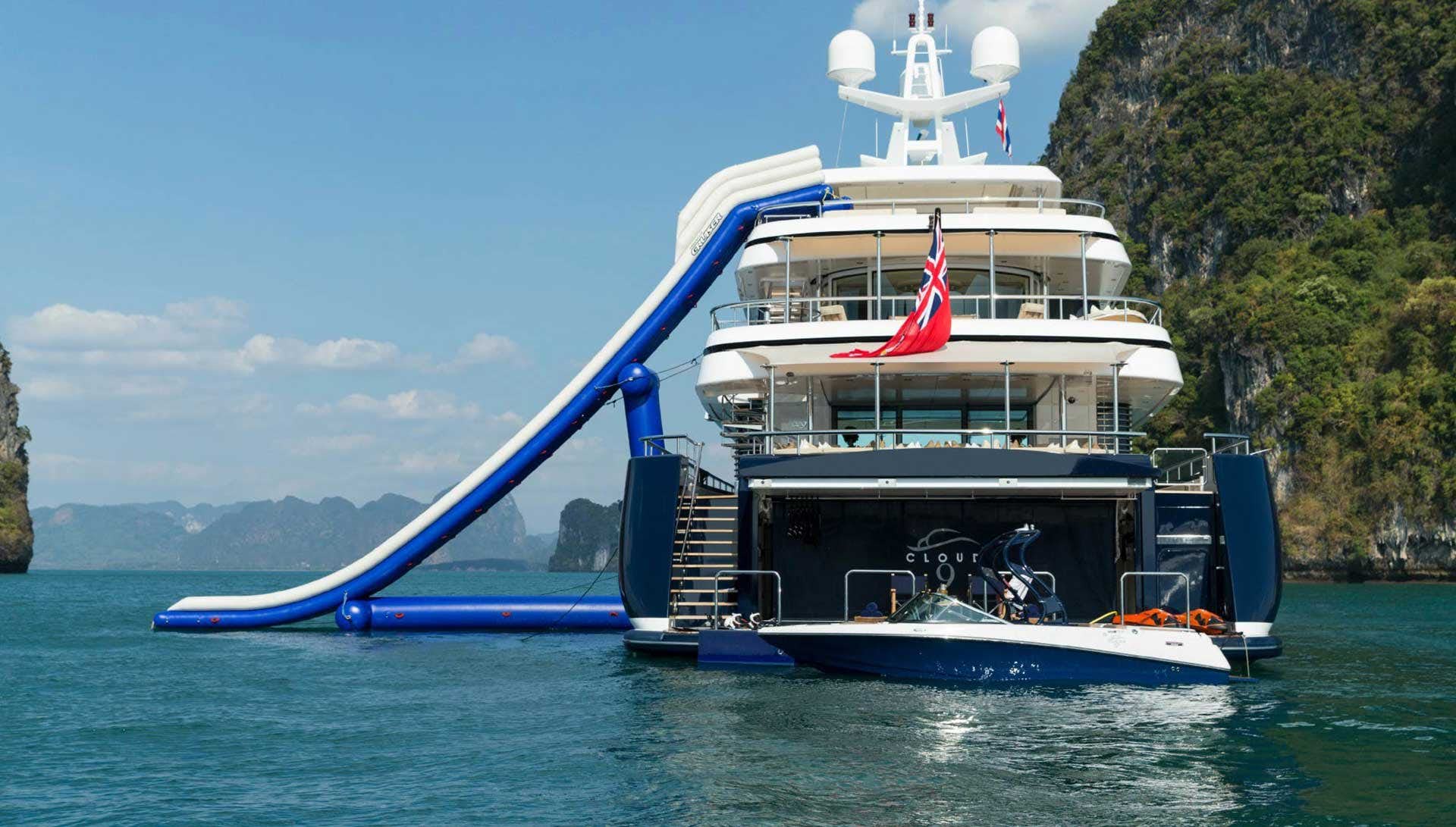 CMN, Constructions Mécaniques de Normandie, is a French shipyard located in Cherbourg, Normandy. Since its foundation by the French aircraft constructor Felix Amiot in 1945, the shipyard has delivered over 350 vessels and began building luxury superyachts at the turn of the Millennium.

CMN uses the highly sophisticated computer assisted CATIA system for the construction of its vessels; a technology specifically designed for modern design and shipbuilding. The CATIA software is also used in the aeronautics industry and is a powerful tool for the integration of complex systems, resulting in optimised internal space.

Accommodation arrangements are individually specified to suit owner requirements, with all the necessary integrated technology and adhering to any regulatory constraints.

Whilst best known in the superyacht industry for luxury motor yachts such as SLIPSTREAM and CLOUD 9, CMN remains on the cutting edge of naval ship design and construction, systems integration, training and through-life support.

CMN is able to build and refit sailing and motor-powered vessels up to 230 feet (70m).

The CMN heritage dates back to 1912. The shipyard was founded by the French aircraft constructor, Felix Amiot. Aircraft design and production gave way to shipbuilding, and the first vessel completed by the yard was a wooden trawler, which was launched in June 1948. Soon after, CMN diversified its offering with the production of minesweepers, Coast Guard vessels, fishing boats, barges, patrol boats and fast attack crafts.

The shipyard specialized in building vessels with the CMN patented ‘glued laminated wood technique’, particularly beneficial for minesweepers built for the French and German Navy. One of the yard’s major minesweeper series was the well-known CIRCÉ class Minehunters (the first one was launched in December 1970, and the following four came between 1971 and 1972). The glued laminated technique was the best answer to the desired ship qualities of non-magnetism, noise absorption and noise reflection.

It was during the 1960’s that CMN began to increase its construction of pleasure craft for the emerging recreational yachting market.

From the 1970’s and throughout the ‘80s, among other racing projects, CMN built PAUL RICARD for Eric Tabarly and KRITER IV for Olivier de Kersauzon.

As the luxury yacht market grew, along with the length of yacht requested by clients, during the ‘90s CMN undertook several notable projects of over 140-foot (42.5m) such as the schooner FRIDAY STAR, which was designed by Scorpio Marine, and the expedition yacht FRENCH LOOK II. FRIDAY STAR remains one of the largest composite sailing superyachts ever launched.

In 1992 the shipyard was taken over by Iskandar Safa, a French businessman of Lebanese origin. In 2007, CMN became part of Abu Dhabi MAR. This holding company, based in Abu Dhabi, is an international shipbuilding group with Iskandar Safa in the role of Managing Director and CEO.

Naval and yacht building excellence with French creative flair, since 1946.

With the turn of the Millennium, CMN advanced into the build of larger motor yachts and custom superyachts, such as the 160-foot (49m) BERMIE II which was designed by The A Group and has a top speed of 16 knots. HELOVAL was another notable build (141 foot / 43m) as well as the 105-foot (32m) sailing yachts ATTIMO and LADY BARBARETTA. The latter, a catamaran, was acquired by British billionaire Richard Branson and renamed NECKER BELLE.

In 2003, CMN launched MARI-CHA IV. This was a revolutionary 145-foot (44.4m) racing yacht built using advanced carbon composites. Designed by the award-winning Philippe Briand to be “the world’s most cutting-edge racing schooner”, she set a circumnavigation record of six days, 17 hours and 52 minutes the same year.

Today, with the development of the CMN 60 line and three further notable launches – NETANYA 8, SLIPSTREAM and CLOUD 9, CMN has become a powerful name in yacht building.

Northrop & Johnson can offer a wide selection of purchase and charter options from the CMN shipyard, as well as advise on new possibilities and refit projects.