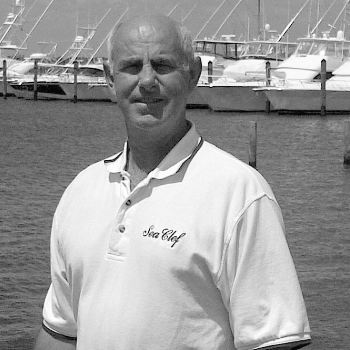 Northrop & Johnson Sales Broker MichaelGeraghty was born and raised in Amityville, New York. Growing up on the south shores of Long Island, Michael was one of the youngest members of Narrasketuck Yacht Club; he began racing sailboats and operating power boats before his seventh birthday. While attending S.U.N.Y. Maritime College, Michael enjoyed racing and helped the team to second in the nation.

After graduating, Michael was tempted by his love of the ocean and tropical weather to cruise south on a delivery to St. Thomas. Michael enjoyed more than a decade of deliveries and charters, captaining large power and sailing yachts. In 1990, Michael then moved to Rhode Island, making the switch from captain to Director of Sales for Defender Industries. In this role Michael managed three stores for West Marine and completed district manager training. He later began a rigger, hydraulic trailer and travel lift operator for Jamestown boat yard, and then began his career as a sales broker. Michael is an integral part of Northrop & Johnson thanks to his enthusiasm, integrity, values and experience.