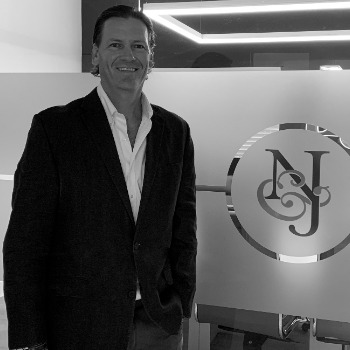 Northrop & Johnson Yacht Broker Grant Henderson is originally from Madison, Wisconsin. He always had an affinity for the water and grew up spending most of his time on the lakes of Madison competitively sailing A and C Scows and Lasers as well as waterskiing and playing hockey. Grant attended Lawrence University; he graduated with a bachelor’s degree in History and started all four years on the LU hockey team.

After graduating, Grant took a leap of faith, moving to Miami to follow his passion for the water. His first foray into the yachting industry was pumping gas at Miami Beach Marina. From there, he joined a 28-meter Westship as first mate.

After 18 months of traveling extensively throughout the Caribbean, Bahamas and along the US East Coast, Grant decided to stay in the industry, but in a different capacity. He obtained his broker’s license in 2004 and has been selling yachts ever since. Grant spent nine years working with Sanlorenzo Americas and yachtBlue.

In early 2018 Grant was hired as Sales Director for the Americas for Baglietto and Cerri Cantieri Navali (CCN) Yachts. Baglietto and CCN are “boutique shipyards” located in northwest Italy and are known for specializing in highly customized projects between 40 meters and 70 meters, delivering two or three yachts per year and building on existing platforms or engineering brand new platforms.

Grant is on the Board of Directors for the International Yacht Brokers Association (IYBA) and serves as the Secretary to Vice-President of IYBA. He was recently elected to his third term as Chairman of the Marine Advisory Board for the City of Fort Lauderdale, is a 10-year member of the Downtown Fort Lauderdale Rotary Club and was a member of Young Professionals in Yachting since its inception. Grant is married to Kimberly, an attorney at Moss Construction, has a five-year-old son, Colin, and a three-year-old daughter, Sloan.