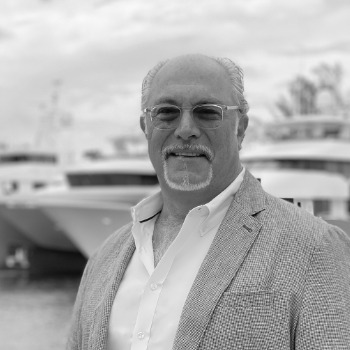 A fourth-generation Floridian, Northrop & Johnson Commercial Director, US, Crom Littlejohn grew up in Indialantic with the Indian River as his front yard and the Atlantic Ocean in the back yard. Whether racing sailboats, rebuilding classic Chris Crafts or simply messing around with boats, Crom spent every spare moment in, on and by the water. By the age of 13, he knew helping others enjoy his passion was his future.

Realizing that larger yachts required a new venue, Crom moved to Fort Lauderdale in 1981, where he was offered a position on the classic Americas Cup Committee boat, BLACK KNIGHT. The desire to concentrate on the larger yacht market led him to take a position as captain on a large motor yacht, cruising and chartering throughout the Bahamas, East Coast and Great Lakes.

With two beautiful daughters back home, Crom made the transition to a land-based life and joined the firm of Merle Wood & Associates, where, he was deeply involved in both the sales and charter divisions for 15 years.

Crom served on the FYBA's Board of Directors for 11 years, including a two-year term as president; he remains actively involved and was honored as Yacht Broker of the Year in 2015. Additionally, he currently holds a Board seat on the AYCA. Crom brings his extensive knowledge and experience within the yachting industry to his role at Northrop & Johnson, based in the Fort Lauderdale office.