A city combining European & Latin American style with a romantic mix of grit & glamour, the locals seduce, the culture excites & the cuisine is to be savored.

A true Latin metropolis, Buenos Aires is often referred to as the Paris of South America, thanks in part to its distinctive, yet inimitable style. Famed for its energy, the city’s social scene swaggers into the early hours, and the passionate locals, be they male or female, ooze a persona that is both unique and sensual. It is no surprise that this is the country that invented the iconic tango in the late 19th century. Tango is experiencing a revival in Buenos Aires, among locals and visitors alike. But it’s not just the exotic dance that attracts visitors. This city has it all — exquisite local cuisine, first-class shopping and some of the hottest hotels in the world.

The Argentine capital of Buenos Aries boomed in the early 20th century with the exportation of its superior beef to Europe, enabling wealthy ranch owners to build Belle Époque-style mansions across the city. The architecture that lines many of the wealthier barrios (neighborhoods) still reflects this style; several of the leading hotel brands have based their premises in and around the elegant and attractive buildings.

One of the most desirable to stay in of the 48 barrios is the chic La Recoleta. Begin your discovery with the grand boulevards lined with designer shops and a thriving culinary scene. Here you will find big hotel names — the likes of Four Seasons and Park Hyatt — along with niche, but equally luxurious hotels, including the Alvear Palace Hotel and Hub Porteño. The Four Seasons Hotel Buenos Aires, which welcomes many celebrities when in town, recently resurfaced from a redesign and comprises a modern tower and a handsome Belle Époque mansion connected by landscaped gardens and two pools. The mansion suites are the best, offering views over the gardens and pools. Rejuvenate with a Porteño tango therapeutic massage, choreographed to the beat of tango music, at the Cielo Spa before dinner at the hotel’s elegant Elena restaurant or a cocktail at the adjacent bar, Pony Line.

Of similar style, the Palacio Duhau Park Hyatt is divided into two buildings with suites located in a Beaux-Arts mansion and the remaining rooms in a tower on the other side of spectacular terraced gardens. For those looking for more of a boutique hotel experience, Hub Porteño is located in a converted townhouse on a quiet side street surrounded by more Belle Époque and Beaux-Arts buildings, including the historic Jockey Club and Palacio Duhau.

A stay in one of the 11 large suites includes authentic Argentine experiences that range from introductions to classic tango and polo to local gastronomic dining to architectural-themed tours. Simply relaxing in the hotel is a cultural experience on its own. The high-ceilinged rooms are filled with contemporary art and sculptures along with antiques from local auction houses and Argentine art from the owner’s personal collection.

Alternatively, the newly gentrified fashion and design district Palermo Viejo has been transformed from a run-down neighborhood to become the city’s most chic destination. Cobblestone streets are lined with huge oak trees and low-rise buildings; the area has become a hotspot thanks to its upbeat bars, restaurants, and designer clothes shops. The Soho area is the more gentrified of the sections that make up the barrio and is where you will find a number of boutique hotels. The 17-bedroom home is modern and retro at the same time. It boasts a lively bar and a large garden with a pool. Book the Garden Suite for its private roof terrace. Alternatively, Nuss is a converted convent ideally located on just steps from the hippest bars and restaurants in town. The best thing about Nuss is that you can laze about the roof terrace, where loungers surround a plunge pool, while still feeling part of the action on the streets below; during the weekends the barrio is home to a number of live musicians, which create an electric atmosphere.

The Clubhouse also is located in this popular neighborhood. A tiny boutique property with just three guest rooms, the renovated four-story townhouse comprises private salons and sitting rooms with original Warhols and other impressive art adorning the walls. Go for The Master suite with its own private terrace.

A stay in Buenos Aires is the perfect opportunity to indulge in some serious feasting. Traditionally the dining scene has been all about dining on copious amounts of meat grilled over an open fire, and those looking to get their steak fix should head to Miranda.

Meat remains the staple ingredient, but a new generation of gastronomes has introduced contemporary variations on traditional dishes with gourmet tasting menus being the current trend, especially in puertas cerradas (closed-door restaurants and speakeasies), which are the height of fashion in the capital. Located in private homes across the city, they are very much open to friends of friends and those who introduce themselves when attempting to make a reservation. With the intimacy of just a dozen or so guests, they allow the chef to really experiment with local produce and to bring the guests into an open kitchen atmosphere where they can experience the real essence of local cuisine. Casa Felix is a fine example of a puerta cerrada. Chef Álvaro Zapata serves up a beguiling five-course tasting menu for up to 12 guests three or four nights a week at different locations (to make it even more exciting the address is only disclosed when booking). Other puerta cerradas to try include Aramburu — which has been listed as one of Latin America’s 50 best restaurants — and La Cocina Discreta in the Palermo Viejo barrio.

During the weekend, locals or Porteños (port dwellers) as they are known, take late-night dining to the extreme. Mingle with stylish locals at Tegui on the outskirts of Palermo and dine on locally sourced ingredients transformed into an ambitious menu.

For those looking to try the traditional approach to dining, Thymus is one of the most noteworthy restaurants for both local and visiting foodies. Located near to Palermo, the restaurant is scattered with sculptures that adorn the gallery above, and Chef Fernando Mayoral creates excellent dishes with local produce. Alternatively, those looking for the younger crowds should try Soul Café in Las Canitas, or Cluny in the trendy Palermo Soho barrio. Sirop in Recoleta is unrivaled for service and turns out some fabulous French dishes.

No trip to Buenos Aires would be complete without sampling the city’s café scene. Drinking coffee while putting the world to right is of paramount importance to locals. The café society rivals that of Paris and Rome and cafés both old and new can be found on almost every street corner. The embodiment of café culture, Café Tortoni was opened in 1858 and is one of the most famous hangouts for artists, writers and musicians. Alternatively, try a classic breakfast of café con leche at the 130-year-old French-style Café Las Violetas.

Live music is one of the city’s main attractions, and contemporary jazz is stealing the spotlight thanks to young and talented musicians. Check out a live show at Thelonious Jazz Club. If you are keen to see or dance some tango, the city offers a vast range of options for both absolute beginners and experts. The authentic experience is called the milongas, and this is the way the porteños do the tango. A multitude of venues is spread all over the city, catering for all tastes and skill levels, each with its own style, custom and formality. La Catedral and the grand old Confiteria Ideal café are the best venues, and if you want to hear good music head to the supper club Torquato Tasso where local artists perform tango. For the ultimate, highly choreographed show, head to the grand theaters for a stunning tango performance, or simply discover street tango as you wander the various barrios.

In Buenos Aires, the nightlife is so pervasive that many porteños come out long after sundown and retire well after dawn has arrived. Bars and clubs can be found in most neighborhoods, but Palermo Soho is the place to go to feel the energetic vibe that the city emanates. For those looking for some cultural nightlife, Corrientes Avenue is referred to as the street that never sleeps and is full of theaters, cafés and even book shops that remain open until first light.

The city buzzes with culture and simply wandering at leisure along the tree-lined avenues gives a real essence of the city. Some of the more bohemian barrios are known for their artists and street performers, while the aforementioned Recoleta barrio boasts French-style architecture and one of the most noteworthy cemeteries in the world — Cementerio de la Recoleta, where almost anyone famous hailing from the country is buried, including Eva Peron.

Must-see landmarks include the Plaza de Mayo, home to the Casa Rosada (presidential palace) and the Metropolitan Cathedral. Alternatively, spend an afternoon browsing the latest exhibits at one of the many hip art galleries dotted throughout the barrios, or at one of the gallery museums, the most famous of which is MALBA (Museo de Arte Latinoamericano de Buenos Aires) in Palermo, or for contemporary collections try the Fortabat Art Collection at Puerto Madero.

As a style-obsessed city, it is no surprise that Buenos Aires boasts a thriving retail scene. Many international labels, the likes of Hermès and Louis Vuitton, can be found at slightly lower prices befitting the Argentine economy. The prestigious Avenida Alvear is the place to head for upscale and luxury shops, while local designer boutiques are predominantly located along the cobblestone streets of Palermo Soho. Argentina is known for stylish leather goods and you will find many high-end shops selling everything from leather bags to belts, including home furnishings made from leather. For custom-made leather goods head to Villa Crespo, or browse at Rossi & Caruso and Humawaca. 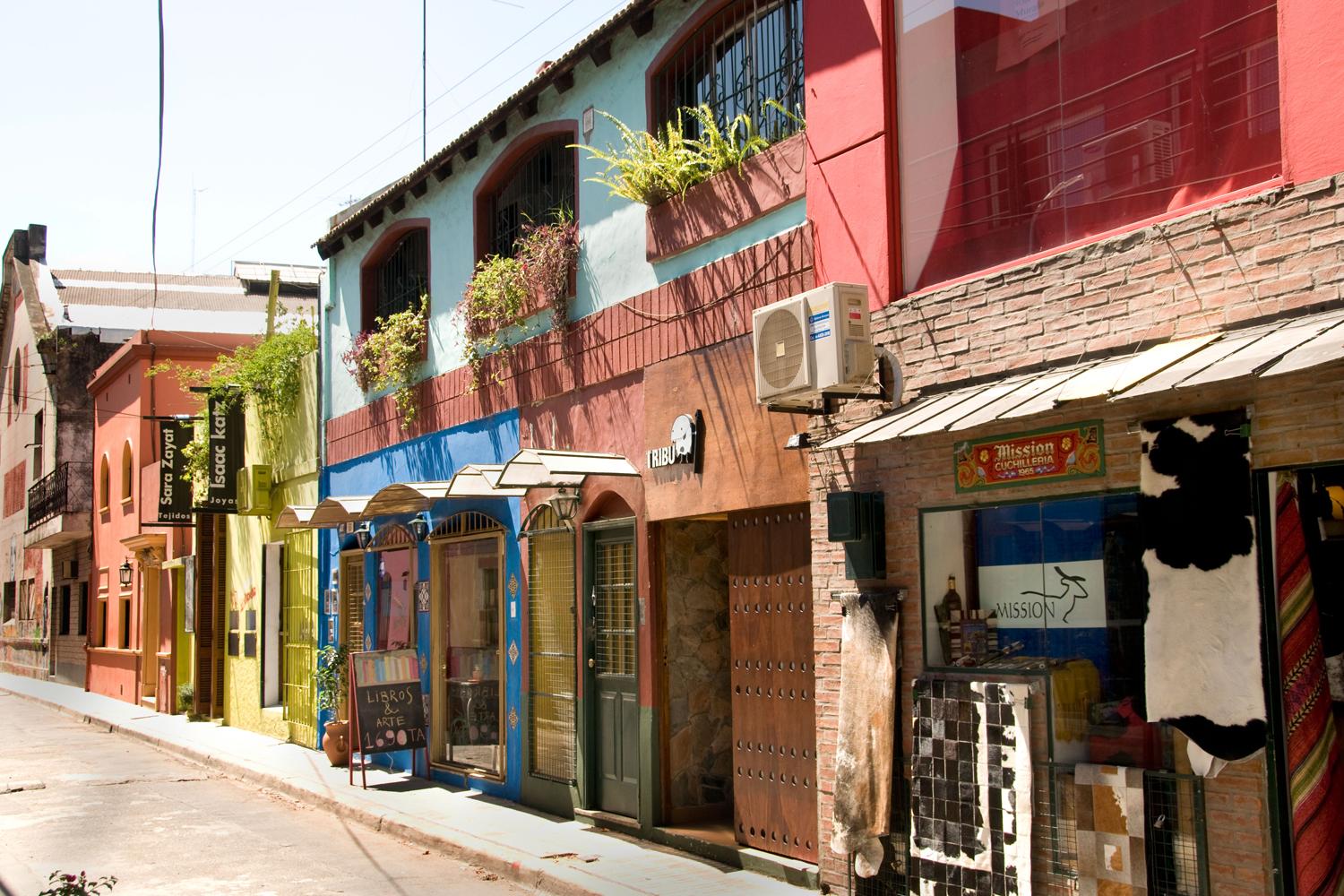 Outdoor markets are the best places to find small antiques and collectibles along with souvenirs. The biggest is the San Telmo Antiques Fair, held every Sunday in Plaza Dorrego in the boho San Telmo district. It is here that you also will find Gil Antigüedades where row upon row of chic vintage clothes adorn the rails. There are also several contemporary art galleries here displaying a variety of works of art.

Come evening, the city bursts alive with performances. From live music by international artists to theater or opera, there are performances every night of the week for 52 weeks of the year. La Trastienda Club is the place for live music from international stars and local talent. Ballet, classical music or opera aficionados will be able to catch a memorable performance at the Teatro Colón opera house. Even for those who aren’t fans of arias, the guided tour into the catacombs of this grand old opera house are worth the slight detour from Palermo.

With so much to discover, Buenos Aries is a place that everyone can enjoy, no matter when they visit, so whatever your age or whatever time of year you plan to go, the city that never sleeps should be ticked off that bucket list.

Green Timepieces for Yachting Enthusiasts May 20, 2022

The Unique Heritage of DYT Superyacht Transport May 19, 2022

Malta - Perfect for Your Charter to Explore the Mediterranean Coast May 19, 2022

Dock the Yacht and Dine in Style at The Rooster

Breathtaking Stays For Your Yachting Days

Boasting many unique features, MIRABELLA offers all those who step on board the ultimate luxury… Read Article