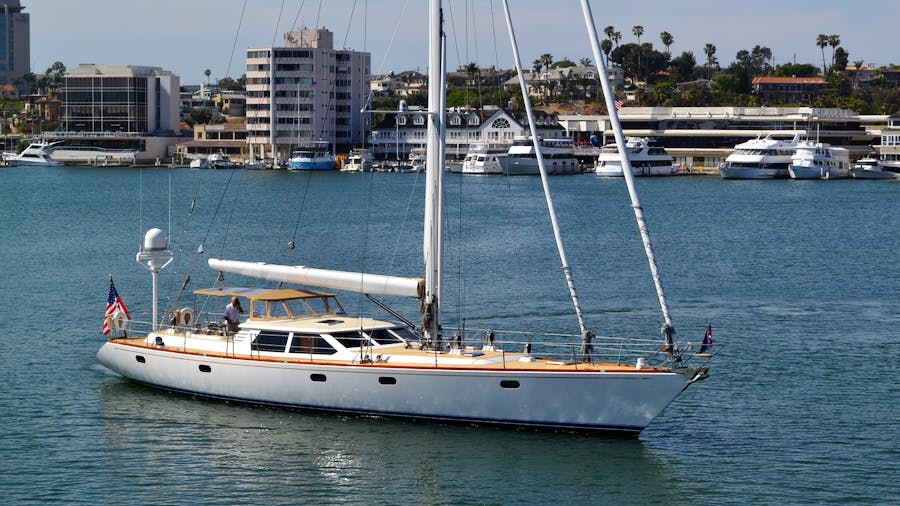 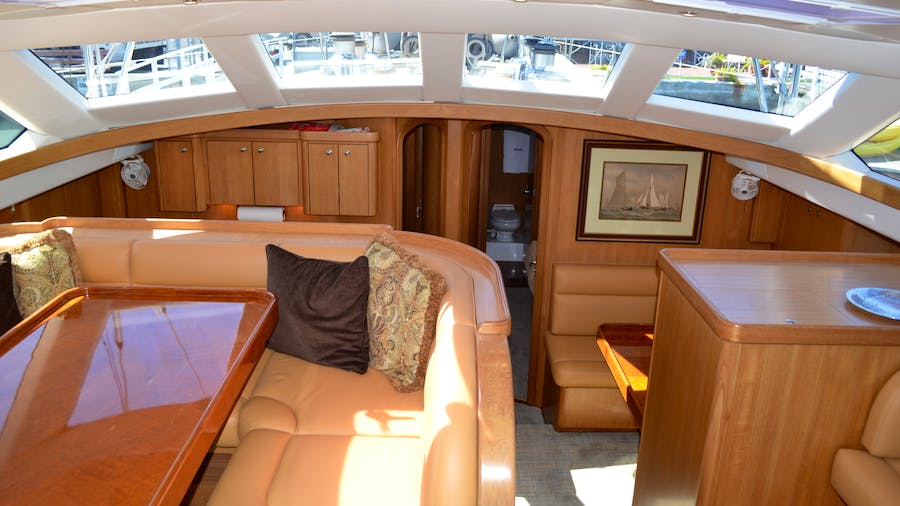 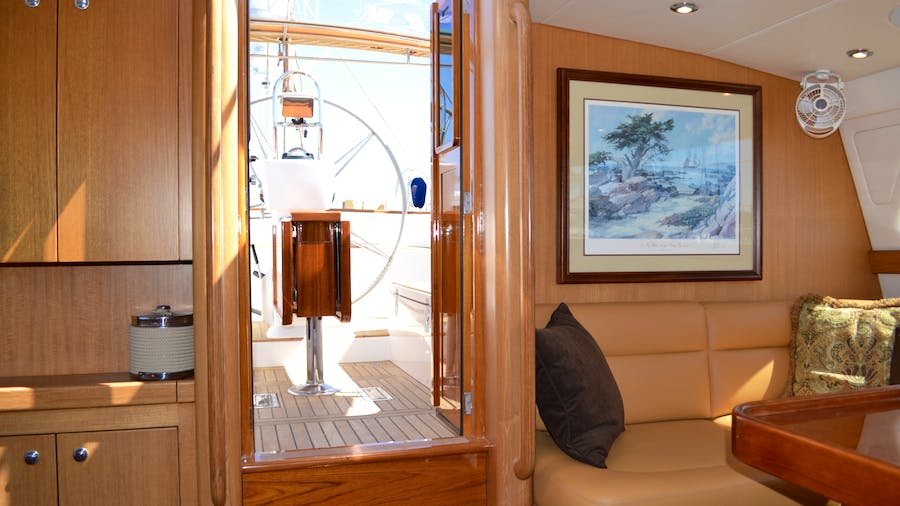 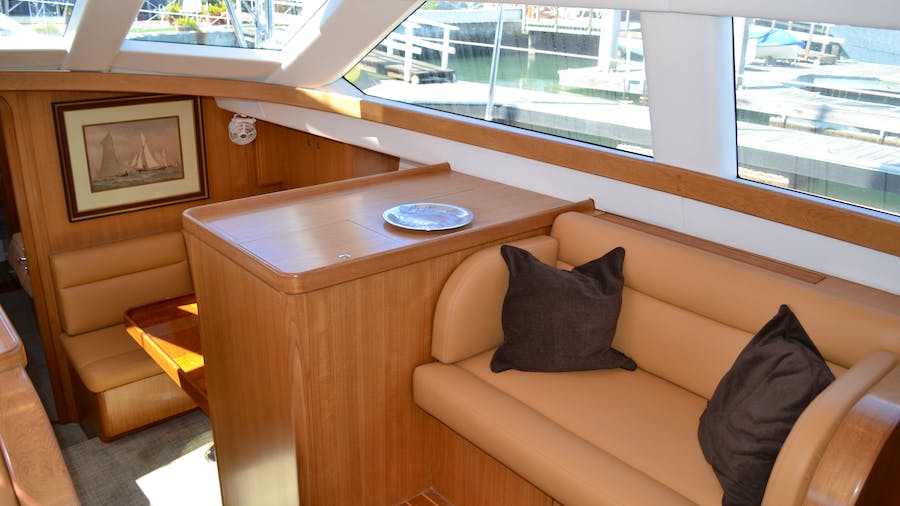 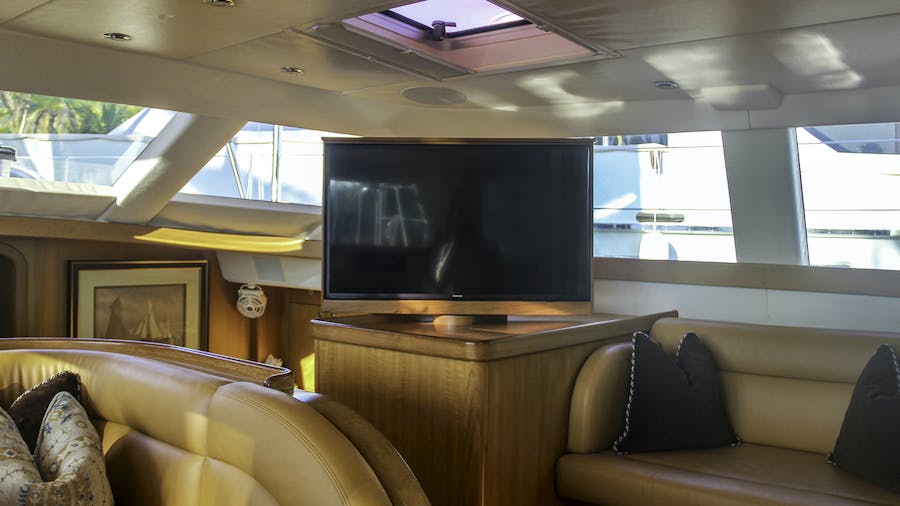 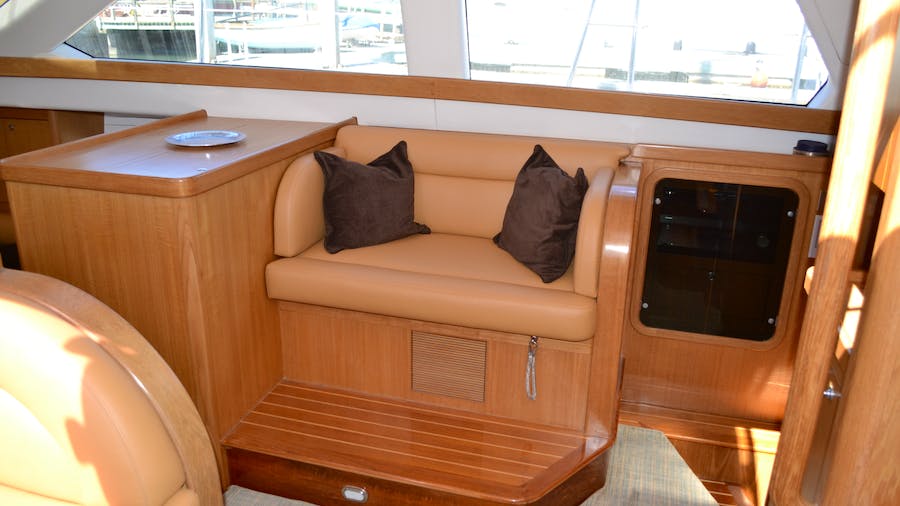 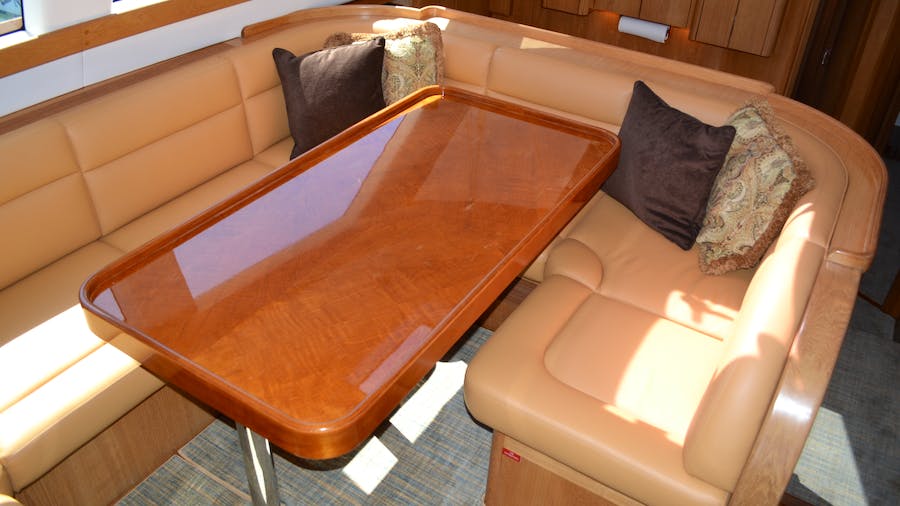 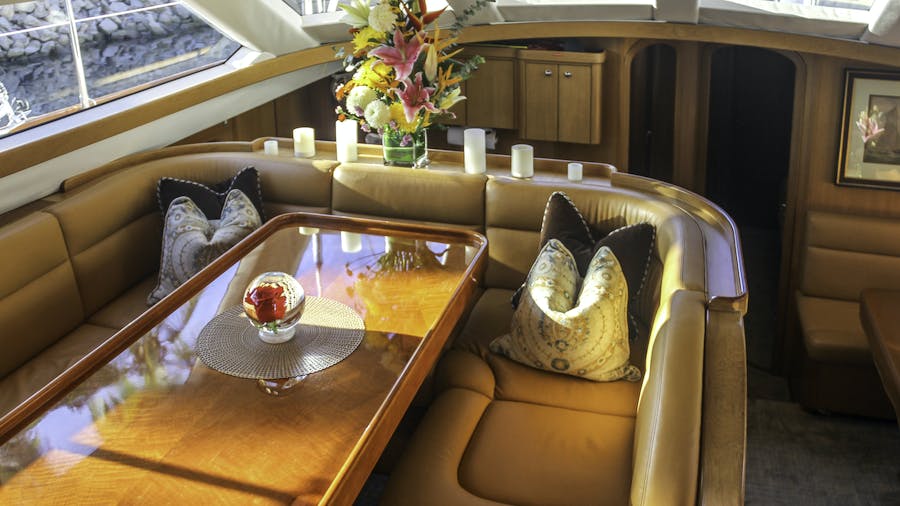 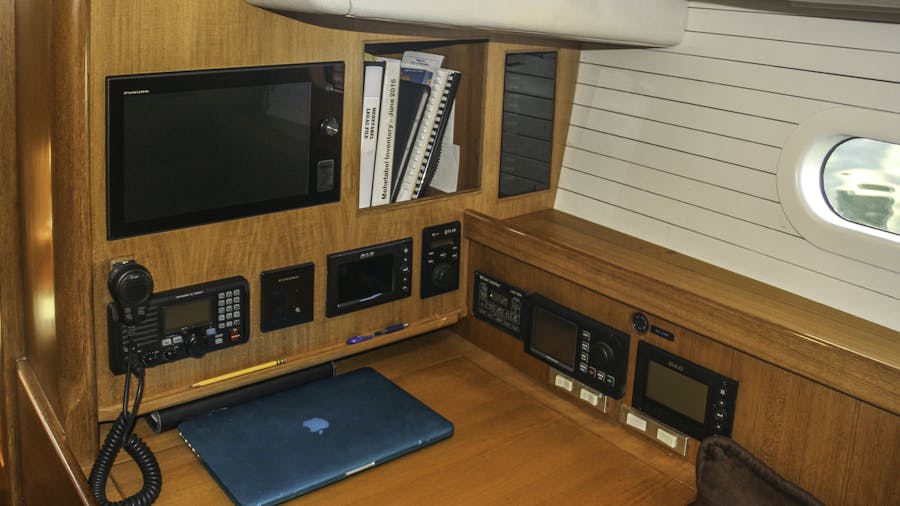 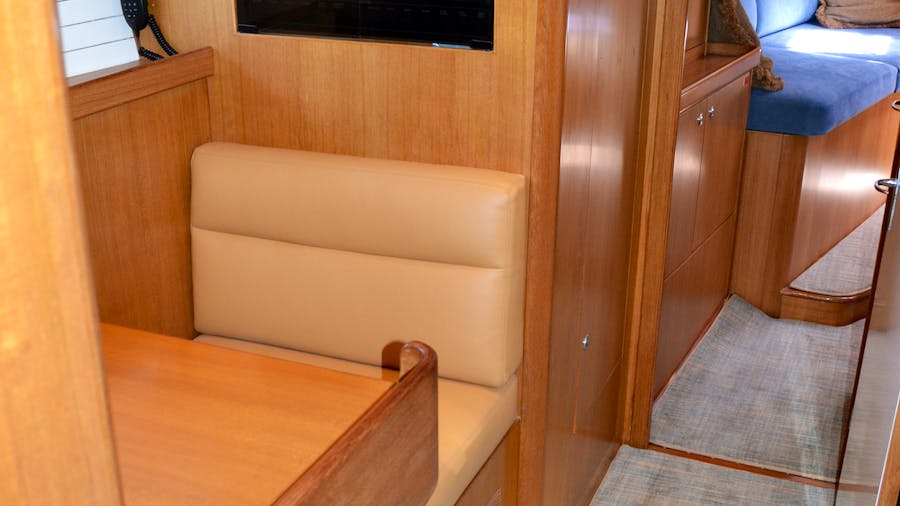 The yacht shown is no longer for sale. Search Yachts For Sale.

This is an archived web page showing historic information for reference purposes only.

The 76-foot (23.16m) MEHETABEL is a true offshore cruiser offering the utmost comfort and performance. All sailing lines lead aft to the power winches in the cockpit, allowing for the yacht to easily be sailed shorthanded.

The luxury sailing yacht showcases timeless interior, with satin-finished teak, that will make you feel right at home. MEHATABEL’s raised pilothouse has numerous windows that allow for sensational views while relaxing underway as well as provide ample natural light.

The yacht’s covered, dry cockpit is the perfect spot for hanging out while at anchor or underway.  When desired, the cockpit can be enclosed entirely allowing for protection in all weather conditions. The sailing yacht boasts easy to walk teak decks that are in excellent condition. Additionally, MEHETABEL features a large drop-down transom, which provides easy access to the water for swimming and easy boarding of the tender.

Over the years, the current owner has continued to improve the yacht with high-level upgrades and maintenance.  In 2013 and 2016 MEHETABEL underwent a major refit where many systems and upgrades were completed.  In 2018, all bottom paint was removed and built back up and the yacht received many additional upgrades.

3 Cabins
6 Guests
2 Crew
This yacht is currently not for sale with Northrop & Johnson. 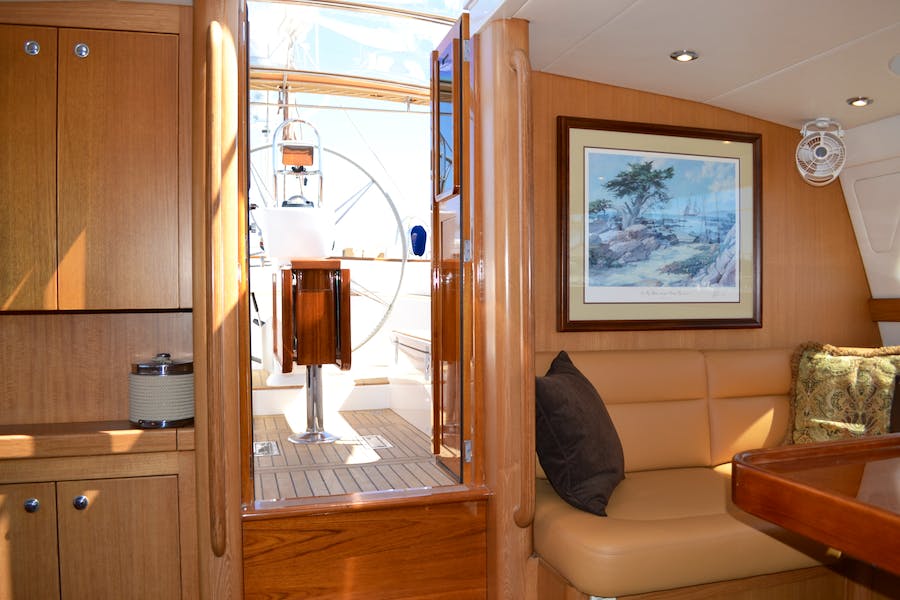 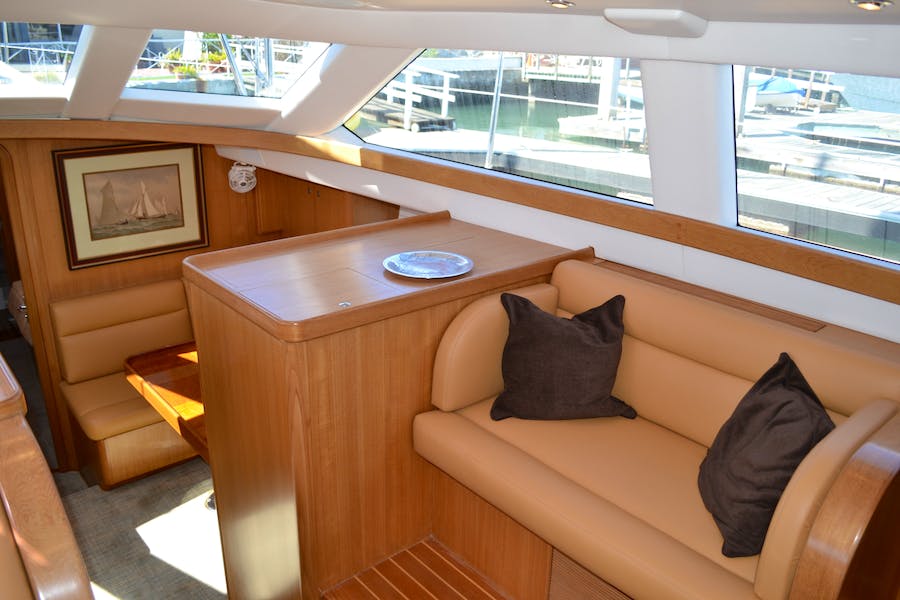 Boarding this exceptional performance cruising yacht, you can step aboard via port or starboard midship boarding gates or via the large transom power fold-down swim step and up a built-in transom step. This step folds flush into the transom while underway.

The cockpit is protected with a large dodger/bimini top, teak soles, helm wheel with instrumentation. This area can be totally enclosed for cold weather sailing.

Sailing and navigational equipment are flush-mounted on the bulkhead. There is a folding teak dining table with more than ample guest seating. All sailing lines lead aft to the power winches in the cockpit. The yacht’s tender is stored forward of the mast on removable chocks.

Stepping below, you will find the open, raised, satin finished teak salon with U-shaped seating and dining table to port, large viewing window and overhead opening hatches. To starboard is a seating bench and flat screen TV that can be raised or lowered to be out of sight. Moving aft on the starboard side is the navigation table with complete electronics. Amidships is the entrance into the engine room with storage, combo washer/dryer and workspace. Forward is the engine and genset area.

Moving aft is the full beam master stateroom with centerline queen bed with port and starboard end tables. To starboard is a settee and ample storage lockers. To port are the built-in chests of drawers, vanity and hanging lockers. Center forward is the hidden flat screen TV. To port is the ensuite master head with stall shower.

Moving forward from the raised salon you step down three steps to the gourmet galley to port with large counter space, built-in refrigeration and freezers and double stainless steel sinks. To starboard there is an L-shaped seating area and dining table with an additional flat screen TV which is mounted on the bulkhead. To port and starboard are two identical guest staterooms each featuring lower double berths with a single upper berth and ample storage. The port stateroom's lower berths can be extended to queen size. Each of the guest staterooms has an ensuite head and stall shower.

Moving forward in the starboard guest cabin you enter a double berth crew cabin with crew head. Below decks features a water-based satin teak interior, teak and holly cabin soles with large viewing windows in the raised salon which is bright and airy and offers expansive views.

Under this knowledgeable ownership, MEHETABEL underwent a comprehensive refit at Driscoll shipyard in San Diego and in Newport Beach in September 2012 completing the refit and upgrades in March 2013 through 2018.

The carbon mast and boom were pulled, inspected, overhauled, painted and all fittings re-bedded. The hydraulic mast, vang and backstay rams were rebuilt. All standing rigging was inspected, re-headed or replaced. All sails were removed and sent to North Sails for inspection, repair, washed and all wear areas were upgraded. New Doyle mainsail was installed in 2014. All winches were serviced and rebuilt.

The open space in the sailing cockpit was redesigned, enlarged, improved, a new dodger protection was installed and a stronger bimini structure was built. This area can now be completely enclosed for foul weather offshore sailing.

New soft goods were professionally selected and redone in the interior including new bound carpet, new synthetic leather upholstery throughout, all new bedspreads and decorative pillows. The interior is very light, bright and tastefully done which is well-complemented by the satin teak interior.

The teak deck seams were reeved and re-caulked and the toe rails/coamings and hatch bezels were varnished. The transom door was pulled, checked, serviced, refurbished, and repainted. The fuel and water tank monitoring system was updated, including new senders, deck fill displays and monitoring displays.

All fuel and water tanks were cleaned and serviced. Transmission coupler was upgraded. Fuel lines were inspected and replaced where needed, the manifold was replaced. The main engine exhaust water jacket was replaced. The main engine reefer heat exchanger was serviced and core cleaned. The raw water hoses for watermaker, A/C compressor and refrigeration system were upgraded. The KVH satellite phone was replaced with an Iridium system. FLIR infrared camera system; mounted on starboard lower spreader were added.

An extensive spare parts list is available upon request.

During this refit, many additional items were serviced and/or upgraded, too many to list at this time. She is ready for inspection and blue water cruising.

This yacht was custom built for a very knowledgeable yachtsman. She is captain maintained and in outstanding condition. Truly a fine performance sailing yacht, MEHETABEL was designed to be sailed shorthanded. All lines lead aft to power winches. Her carbon sloop cutter rig is easy to balance and gives one many sail configuration options, all handled hydraulically. She powers well at 9.5 knots and tops out at 11.5 with close to a 900-mile range at 9 knots.

She features a large protected sailing and entertaining cockpit. Her interior is completed in water-based satin teak finish with teak and holly cabin soles. The raised salon has large viewing windows and is an excellent gathering spot either underway or at anchor. Her after master stateroom and two guest staterooms all have ensuite heads. Crew quarters are forward.

MEHETABEL is a joy to be aboard either on the hook or underway.

Potential purchasers should assume that items on the vessel at the time of viewing, but not specifically listed on this sheet, are not included with the sale of the yacht. These specifications are believed to be true and correct but cannot be guaranteed.

Engine hours are as of the date of the original listing and are a representation of what the listing broker is told by the owner and/or actual reading of the engine hour meters. The broker cannot guarantee the true hours. It is the responsibility of the purchaser and/or his agent to verify engine hours, warranties implied or otherwise and major overhauls as well as all other representations noted on the listing brochure.

The company offers the details of this vessel in good faith but cannot guarantee or warrant the accuracy of this information nor warrant the condition of the vessel. A buyer should instruct his agents, or his surveyors, to investigate such details as the buyer desires validated. This vessel is offered subject to prior sale, price change or withdrawal without notice.

Would you like to get more information about MEHETABEL? Our Brokers are standing by to help. 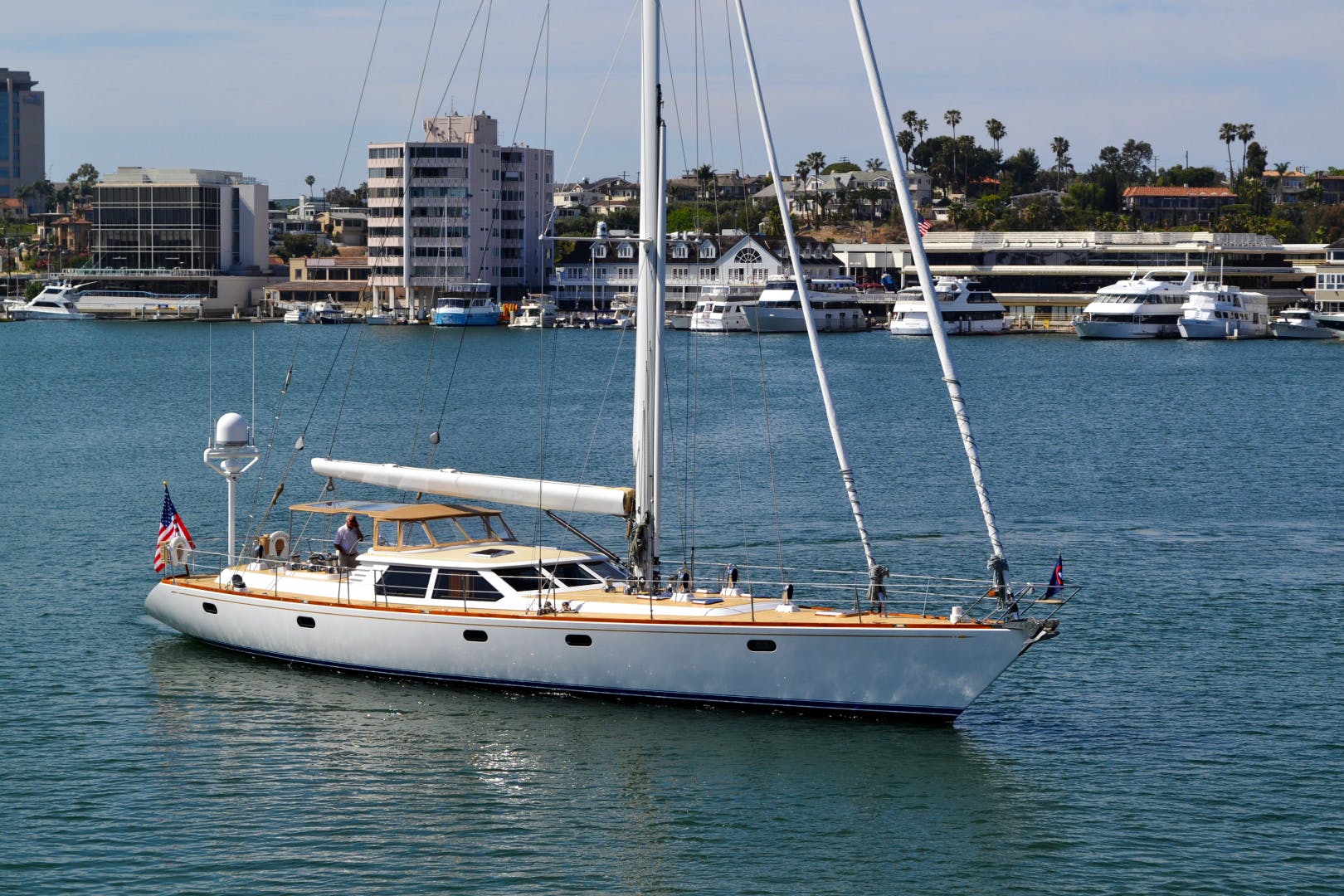 We appreciate your interest in MEHETABEL. One of our experienced sales brokers will be in touch soon.