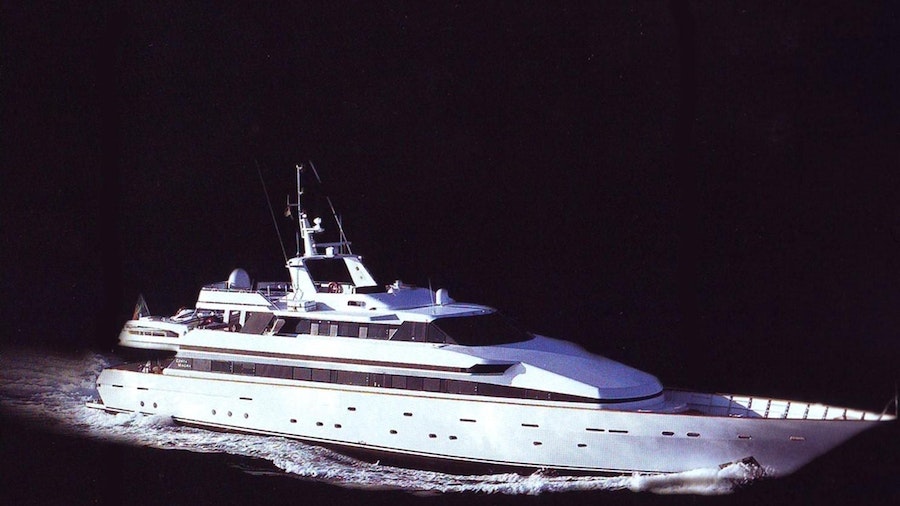 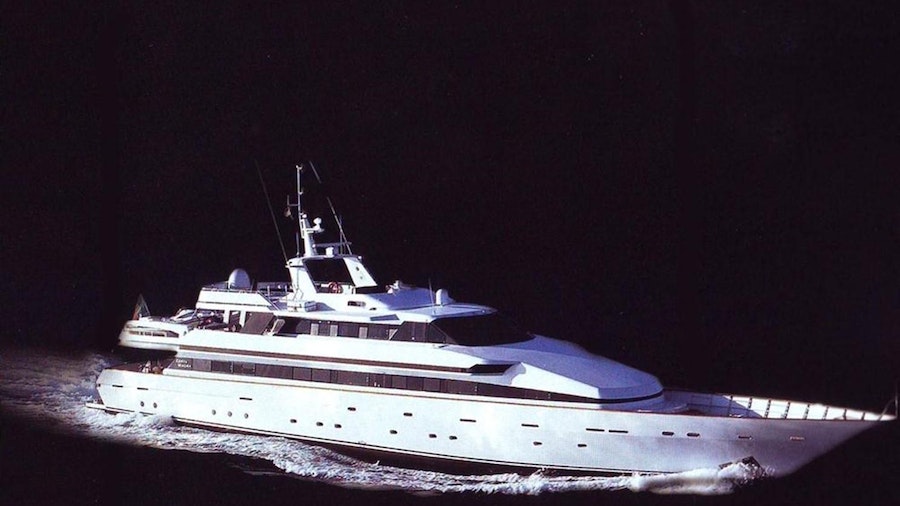 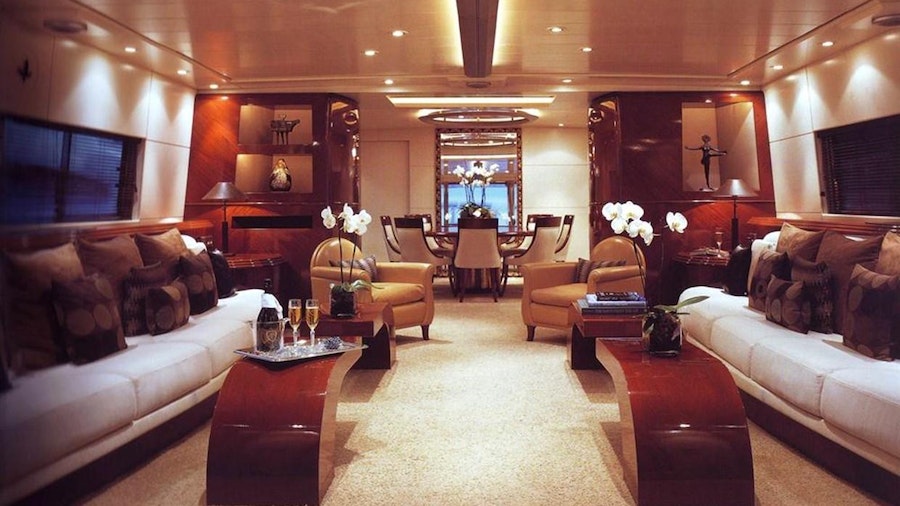 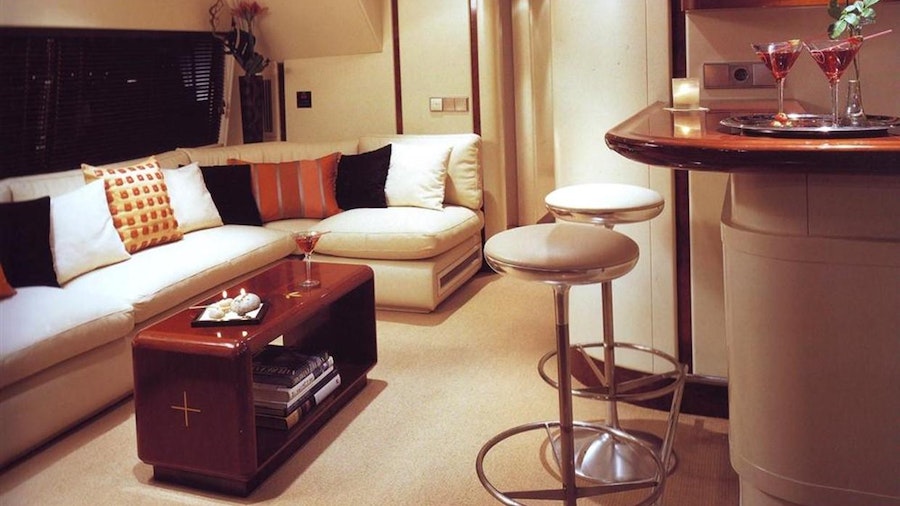 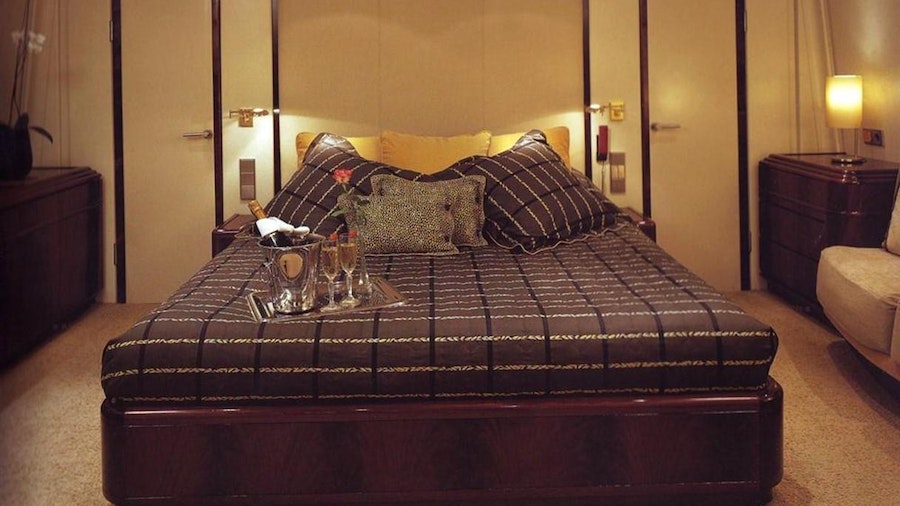 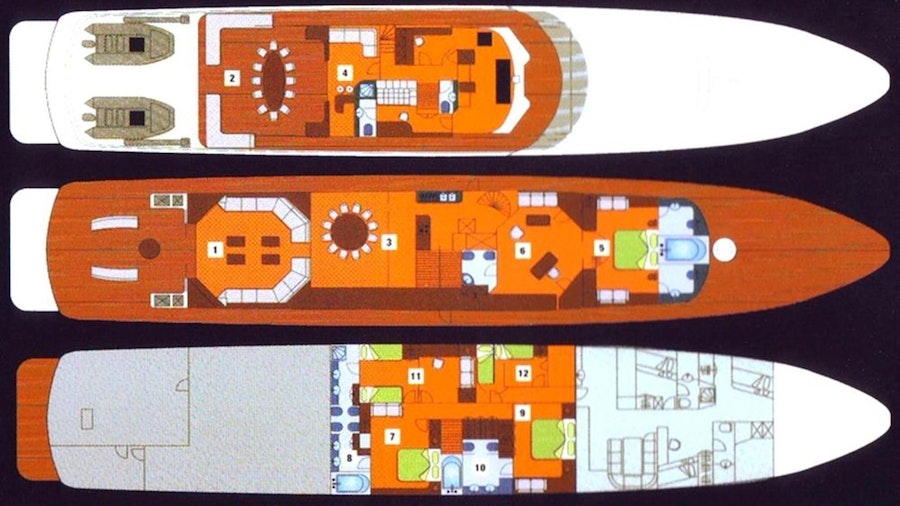 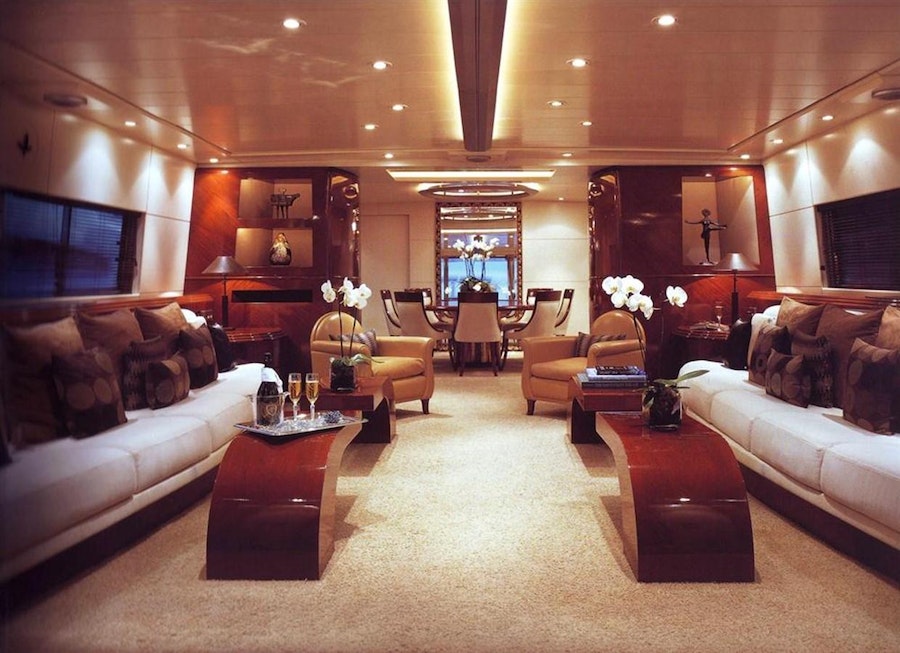 The large OWNER’S SUITE is forward on the main deck. The foremost part occupies the full width OWNER’S BATHROOM finished in rose pink marble. The bathroom has access through doors on the port and starboard sides. Amidships is a large marble bath. On the starboard side of the bath is a bidet and a washbasin. On the port side are the toilet and a washbasin. Next is the centrally positioned king size bed with bedside tables on either side. On the port side of this stateroom is a sofa. Further aft is the OWNER’S STUDY. To starboard is a desk and executive chair. Opposite is a sofa and chair and a coffee table. This cabin has ample locker and hanging space.

Access to the owner’s quarters if from this starboard side passageway. Here is access up to the wheelhouse and down to the guest quarters.

Amidships, through a door from the passageway, is the L-shaped GALLEY and PANTRY AREA.

Forward to port are the stairs leading down to the crew’s quarters.

Aft is the DINING ROOM with a large round table for ten guest. and the MAIN SALOON which has an intimate central seating area with two sofas facing each other. There are two sliding doors leading from the saloon to the large AFT DECK.

From forward is the CREW AREA with to port an UPPER and LOWER BERTH CABIN and to starboard an UPPER and LOWER BERTH CABIN with a bathroom ensuite including a shower, head and washbasin. Aft to port is a bathroom with a shower, head and double wash basin. Aft to port is a TRIPLE BERTH CABIN. The CREW MESS has a dining table with a U-shaped settee. There is a video library with a television and video recorder. In the starboard corner is an electric Miele 4burner ring stove and double stainless sink. Along the aft bulkhead are large refrigerator and deepfreeze storage. Aft to port of the crew mess is the LAUNDRY AREA. Aft (through a watertight door) is a walkin COLD DRY STORE. Aft to port is a bathroom with a head. Aft of this is a TWIN CABIN with upper and lower berths. Then there is the stairway for the crew access to the main deck. There is an emergency crew exit from the forward crew cabin.

Aft, through a door, is the crew service access to the lower deck GUEST ACCOMMODATION. To starboard is a DOUBLE BEDDED CABIN with a bathroom ensuite including a bath with a telephone type shower, a double sink and an adjoining head and bidet area. The cabin is equipped with a radio cassette and an internal phone. There are hanging lockers and drawers. Aft to port is a

From the engine room there is a possibility of access to the GARAGE with a lift to aft deck (not in use presently). Access is through the hinged aft bulwarks and ramp to the shore.

Forward the wheelhouse is L-shaped, with the radio room area on the port side and the entrance to the CAPTAIN’S CABIN on the starboard side. The captain’s cabin has a single bed that can be opened to form a double bed. There is a desk and an ensuite bathroom with a shower, head and washbasin.

From the radio room area is a door leading to a short passageway from which is access to a DAY POWDER ROOM and to the SKY BAR. This has a L-shaped seating to port and to starboard and a bar with a stainless steel sink and an Electrolux frigo bar with icemaker. Double sliding doors lead onto the UPPER DECK with a large dining table and 2 additional dining/coffee tables with

banquette seating. The JACUZZI DECK is adjacent and has a spa Jacuzzi with banquette seats on either side. There is teak decking throughout.

Up from a corridor is access to the FLYBRIDGE AREA, which is teaked. There is a steering consul amidships with a bench seat with duplicate controls. An extension was constructed in 1999 to give a total of 60 m². There is a bimini top over the fly bridge.

Television and video in crew mess 2009

Would you like to get more information about COSTA MAGNA? Our Brokers are standing by to help. 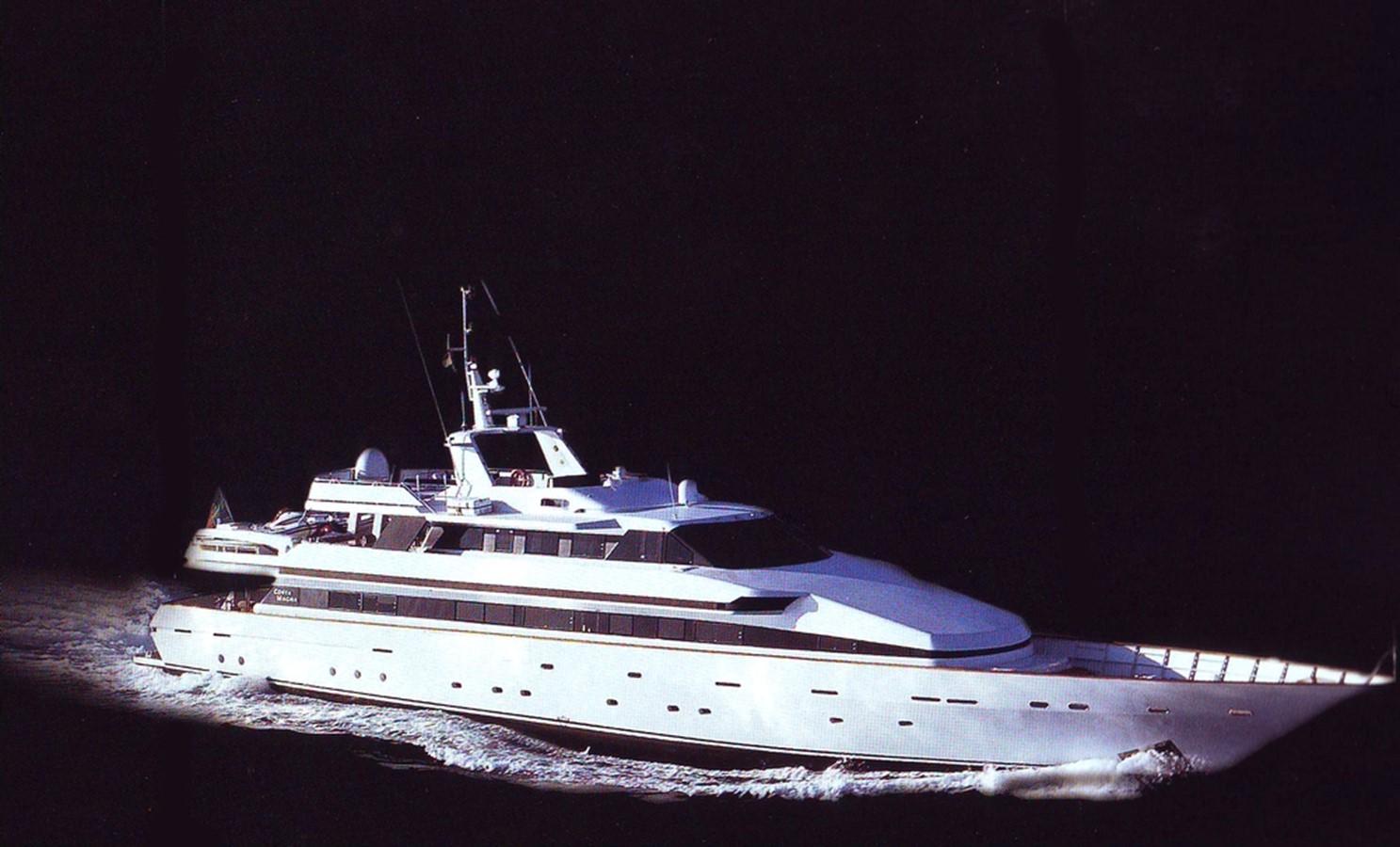 We appreciate your interest in COSTA MAGNA. One of our experienced sales brokers will be in touch soon.